The economics of data

Most assessments of the impact of AI on European labour markets conclude that it will have two key impacts: displacing human labour and driving productivity. In the long run, both of these effects can be positives. In the short run, they are likely to be disruptive and disorienting. The reach of automation into parts of the cognitive labour market that have heretofore been protected from it may be a social shock, and raises the prospect of a hollowed out labour market where elite cognitive labour and non-routine low-cost manual work sit above and below a disappearing landscape of traditional skilled middle class jobs in both manufacturing and services. While new roles are likely to be created as well as old ones displaced by machine judgement, the detail of this evolution is inherently uncertain in advance.

Concerned policymakers are inevitably beginning to worry about the disrupted. Their worries tend to focus in some key areas. One is the skills demands that will come with this transition. Facilitating the development of new skills and enabling workers to retrain are a constant focus, perhaps especially in manufacturing. But the role of government and businesses in delivering on this remains undefined.

How much of this burden can and should be borne by the private sector? What is the public sector’s role in a model in which the most intensive retraining needs are likely to be individuals over 50 and long out of the public education system? Beyond STEM skills, what other kinds of skills needs is the AI revolution likely to create in areas such as communication?

How to make the labour market sufficiently adaptive to restructure around these changes without sacrificing worker security is another inevitable challenge. Social welfare systems would struggle with large scale job displacement – but employee protection could be a check on effective deployment of technology.

If there is a balance to strike here, where is it? How do we ensure that worker protection does not in itself become an incentive to automation in a self-defeating way? What challenges of labour mobility need addressing?

Some observers have gone much further in their thinking and asked if the new economy is potentially redefining the nature of labour itself. Labour productivity improvements are expected to account for over 55% of all GDP gains from AI between now and 2030. This means a further fall in labour ’s share of GDP. Some argue that in an economy driven by data, the personal data that individuals provide to drive the operation and profitability of the era’s defining technologies is analogous to their labour – and they should be remunerated for it, especially if these technologies are simultaneously devaluing their physical or cognitive labour in other ways.

How credible are these arguments? How feasible is the idea that people can and should be rewarded for the work their data does and the profit it earns for others?

Cognition as work: the reach of AI into current labour markets 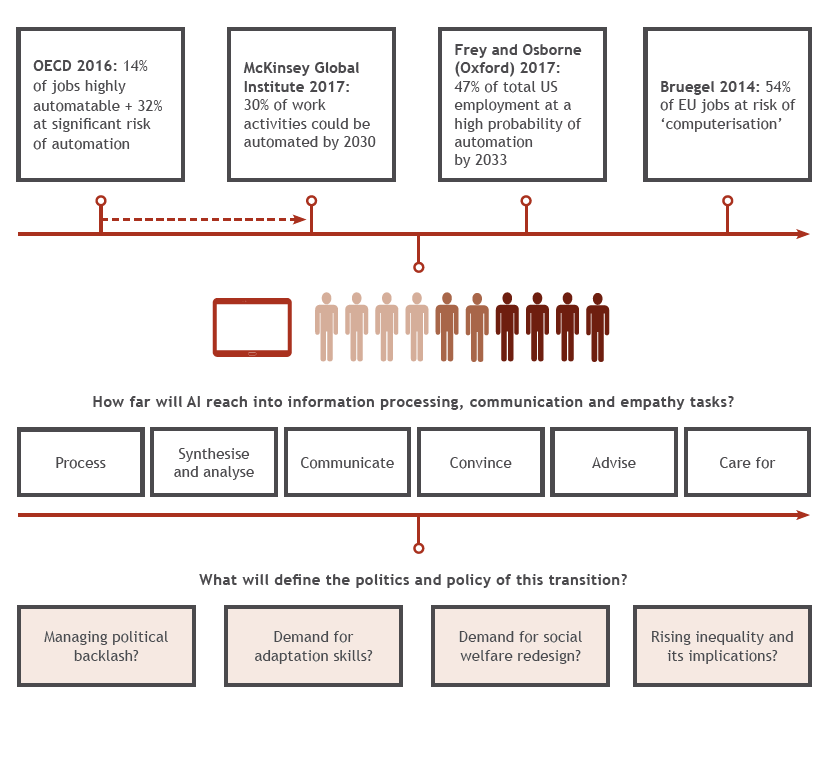 This article was written for the Politics of AI conference convened by Global Counsel in 2019 and forms a part of a wider AI briefing pack: /insights/report/politics-ai