EU carbon market reform: a victory for compromise over ambition

Yesterday the price of carbon in the EU Emissions Trading Scheme (EU ETS) – the carbon market the EU describes as its principal policy tool for decarbonisation - hovered around €6 per tonne of carbon (€/tCO2), far below the €30/tCO2 analysts consider the minimum price for driving emissions reductions and low carbon investment. That morning Conservative MEP Ian Duncan released his draft report for the European Parliament’s Environment Committee on the European Commission’s reform proposals for the EU ETS in the period 2021 to 2030. The price barely moved. In seeking to ensure his draft emerges from the European Parliament in (something like) one piece, Duncan has sacrificed ambition for compromise. 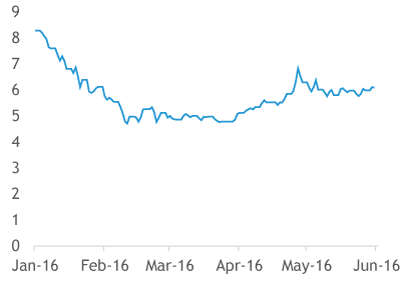 On two key issues Duncan has stuck close to the Commission. First, supporting an annual decline in the number of allowances of 2.2% despite pressure from an array of NGOs, thinktanks, factions in the European Parliament, and some European utilities to increase the rate to 2.4% or 2.6%. Second, he has resisted calls to increase the number of free allowances for industry, staying with the Commission’s proposal that 57% of allowances be auctioned.

Duncan’s biggest changes are intended to carry the support of sceptical pro-industry MEPs. He has suggested a mechanism for more auctioned allowances to become free allowances if the cap on total free allowances is due to be breached and sought to make the allocation of free allowances more targeted by introducing four tiers for industries depending on their vulnerability to carbon leakage; a plan originally raised by the UK and France. He may face problems here. The Commission has already expressed concerns over the plan’s complexity and will be uncomfortable with his suggestion that qualitative judgements – rather than a strict quantitative formula - could be used for those on the boundaries of each tier.

Elsewhere Duncan has courted Central and Eastern European MEPs by proposing to enlarge by around a third the ‘Innovation Fund’ which is intended to develop new technologies such as carbon capture and storage/use. He has also proposed strengthening member state control over how the EU ETS Modernisation Fund – for use in upgrading old power plants and industry - is disbursed and making it easier to access. Whether this satisfies his ECR political group colleagues and EU ETS sceptics from Poland’s Law and Justice Party will be an important signal when the report goes to the ENVI committee on 21 June.

Duncan’s draft report contains something for everyone and everything for no-one, but least of all for advocates of a higher carbon price. Advocacy group Sandbag were quick to label the proposals “underwhelming” and EU ETS supporters will now be wondering where reform ambition might come from, if not from the European Parliament. In response Duncan might point to his proposal that the headline 2.2% annual reduction figure be reviewed and possibly upgraded in 2023 when countries are due to review their UN climate commitments. But if the EU ETS is to reclaim its role as the EU’s principal policy tool for decarbonisation, this is likely to be too little too late.

The Commission’s ambitions to lead the world in action on climate change will continue to rub against member states’ imperatives to manage the economic costs. Under Frans Timmermans, a team of Commissioners therefore have a huge task of putting together a European Green Deal. The Commission is already clear this will prioritise strong environmental protection, support for…

Bill Gates says climate activists are wasting their time trying to encourage divestment from companies involved with fossil fuels. The impact on emissions to date, according to Gates, is probably zero. Instead, activists should focus their efforts on backing new technologies that will either slow carbon emissions or reduce their impact on the climate. In short, more…