How the refugee crisis transformed the AfD

Picking carefully through the numbers from the March 13 state elections in Germany brings home an important point about just how blue collar the AfD has become as a party. The AfD which did well in Baden-Württemberg, Rheinland-Pfalz and Sachsen-Anhalt, as it was expected to do. In doing so, it demonstrated how the crisis has transformed the party from one of professors into one of economic and cultural protestors.

In all three states the results told a story about the way that social tensions about the financial and cultural consequences of mainly Muslim migrants have transformed the AfD’s support base and pushed the party above 10% in each. 27% of the unemployed and 24% of blue collar workers in Rheinland-Pfalz voted for the former ‘party of professors’ that gained an overall support of 12.6%. The CDU and SPD both lost serious ground among those groups. 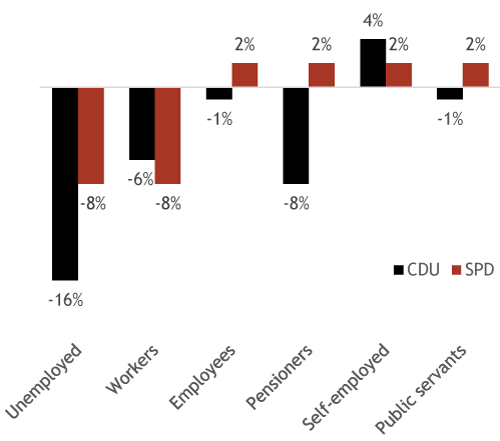 AfD voters are also primarily middle-aged and male and average educated – precisely the kind of economic worker challenged by globalisation to whom anti-establishment movements are appealing elsewhere. While 62% of AfD supporters voted for the party because of general disappointment with established parties the arrival of refugees was their top concern (65%), followed by social justice (39%).

The political journey here is worth remembering. The AfD was established as a Euro-sceptic party in opposition to a series of bailout packages for South European countries. The founders, many of whom were economics professors like Bernd Lucke, attracted support from market liberals with a free market critique of the euro based on moral hazard and the unviability of the currency zone. During the general election in 2013 when the party slightly missed the 5% threshold, the single largest group of AfD supporters were former voters of the liberal and market-friendly FDP.

From the beginning there was a latent conflict between the liberal and a national conservative wings within the party. As the survival of the Euro faded as a concern among voters, the AfD slipped into an identity crisis, the outcome of which was the takeover by the national conservatives under Frauke Petry and Lucke’s ejection.

The AfD has raised all kinds of anxieties in German politics, including the long standing fear of any nationalist political vehicle appearing to establish itself to the right of CDU/CSU. But like populist movements elsewhere the AfD is also winning anti-globalisation left wing votes from Die Linke. Probably beyond the pale as a coalition partner for either major party the net effect is just to squeeze further space in the political centre – and increase pressure when it comes to immigration, the EU and issues like transatlantic free trade.