Saudi Arabia and Qatar agreed to settle their dispute at the Gulf Cooperation Council (GCC) summit in al-Ula earlier this month. Despite uncertainty until the last minute, Bahrain, Egypt and the UAE followed the Saudi lead and grudgingly restored land, sea and air transport links with Qatar. Riyadh’s willingness – and in the end eagerness – to end the crisis was prompted by the prospect of a much more complicated international security environment, largely due to changes in Washington. Saudi Arabia’s Crown Prince Mohammed wants to build goodwill with Joe Biden, who has repeatedly criticised the kingdom for its human rights record and involvement in the Yemen war, and the Saudis perhaps viewed ending the GCC rift as the least painful step. Reconciliation with Qatar is an important achievement. But perhaps the harder task now is to put the leaders’ commitment to work “as a single, unified economic and political group”, as they promised in the al-Ula declaration, into practice. Two issues stand out that the group will need to manage to revive the GCC as an economic project.

The first is the distrust created by the blockade. Leaders in the region are aware that external political factors led to the reconciliation, meaning the conflict is frozen and managed, but not necessarily settled. Doha has not conceded to any of the 13 demands that the blockading quartet issued in 2017. The same leaders remain in place, making it hard for governments to move on from the very personal rivalry between the ruling families. The absence from the summit of Abu Dhabi’s crown prince, Mohammed bin Zayed, the suspected mastermind behind the Qatar blockade, is a clear signal. He chose to send Sheikh Mohammed bin Rashid al-Maktoum, Dubai’s ruler and UAE prime minister, in his stead. Leaders in Doha but also Kuwait City and Muscat still fear that Saudi Arabia, or the UAE could at some point in future use economic pressure against one of them again. They have drawn the lesson from the embargo against Qatar that too much economic interdependence creates vulnerabilities.

With low trust among GCC leaders, these smaller Gulf states see a large and diversified network of trading partners outside the region as a hedge against import dependence on their “Gulf brothers”. The lack of economic complementarities in the region makes this task easier. But Qatar still had to re-organise its regional supply routes to deal with the largely logistical challenges stemming from the blockade. Omani and Kuwaiti ports replaced the UAE’s Jebel Ali as the key source of shipments to Qatar. Doha has also built closer commercial ties with Turkey and Iran. As original sources of imports, these countries still account for a small fraction of Qatar’s total. But they offer alternative supply routes that Doha is unlikely to dismantle now. What’s more, the disruption in food supplies from Saudi Arabia led Doha to increase self-sufficiency in critical sectors, a policy that it is unlikely to abandon. Omani and Kuwaiti support for Qatar has not been selfless, as they also worry about their dependence on their Gulf neighbours, and Muscat recently banned land ownership by non-Omanis in strategic border areas in response to land purchases by UAE citizens.

Qatari imports from the region
As % of total imports, 3-month rolling sum 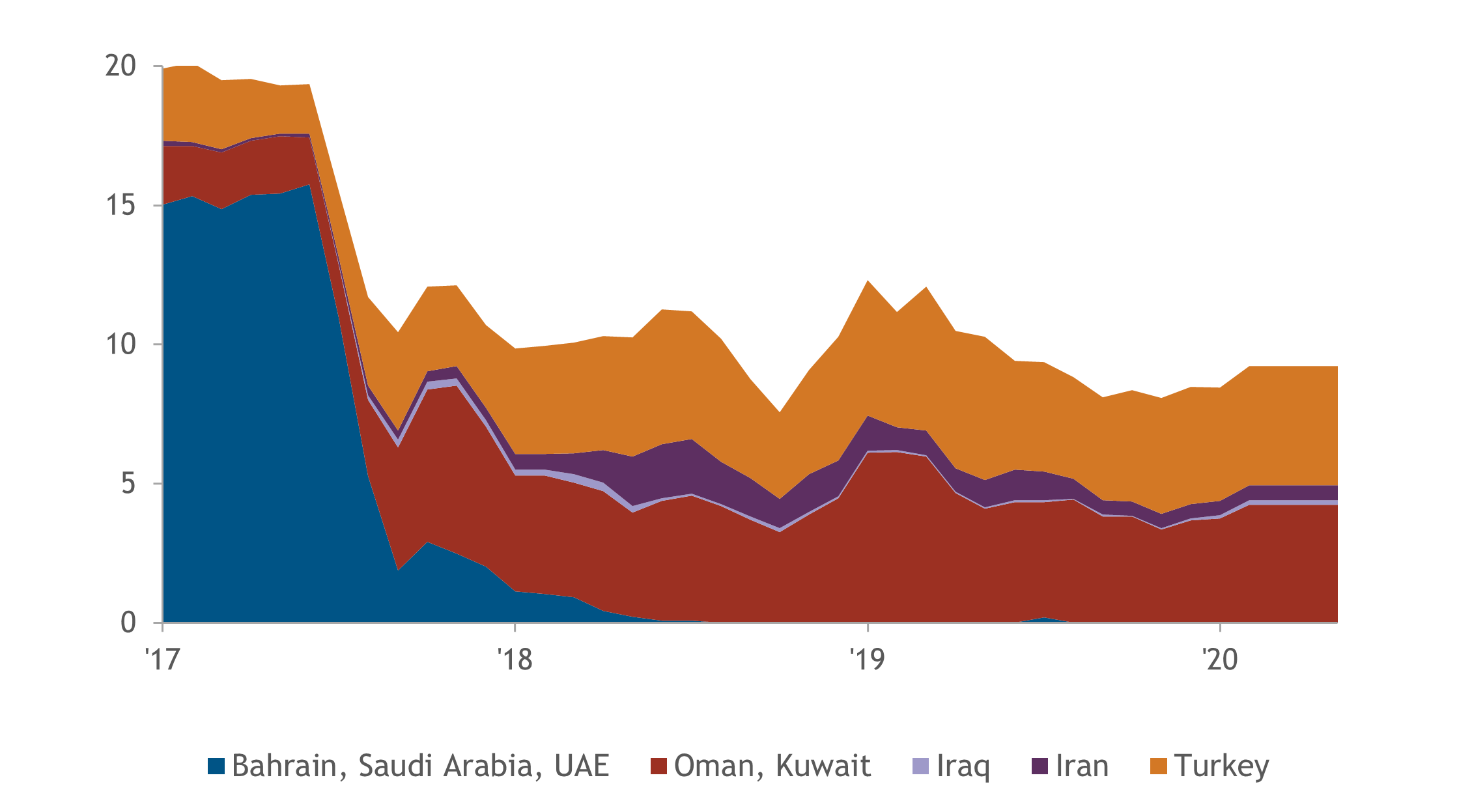 The continuing distrust is compounded by a second issue - heightened regional competition due to the current economic crisis. The world is still struggling with the greatest pandemic in almost 100 years which has suppressed demand for oil and gas. Prices remain low after a historic price crash last year requiring all governments in the Gulf to tighten their belts. Growing uncertainties about the length of the current second (or third) wave of the pandemic in major economies and potential virus mutations has forced the OPEC+ group of oil producers, notably Saudi Arabia, to accept further output cuts. All GCC economies rely more or less on the same narrow set of sectors - hydrocarbons, chemicals, logistics and services - and feel the need to diversify. This means competition for foreign investment is becoming fiercer. Saudi Arabia has undertaken a comprehensive programme of economic reforms as part of its ambitious Vision 2030. Its attempts now to lure business from Dubai to Riyadh shows that even the Saudi-Emirati alliance is not without tensions. Every country is under pressure to increase its attractiveness. Dubai and Doha will compete for international attention and investment when they host, respectively, the World Expo later this year and the FIFA World Cup in 2022.

This doesn’t mean that the al-Ula agreement won’t restore some trade. But this month’s reconciliation does not automatically revive the GCC’s economic project that has at its end a complete common market or even, as was discussed just a decade ago, monetary union. Gulf leaders will need to build trust and ensure that competition takes place in an orderly fashion. The extent to which they will encourage their businesses to engage in commercial activities with the other side, which matters in a region where the private and public sectors are not always clearly distinct, will be a first marker of goodwill. The al-Ula declaration’s commitment to achieving “full economic citizenship” might already sound ambitious to those who remember the expulsion of Qataris from blockading countries, but practical steps in this direction would send another important signal. However, the more immediate test for “Gulf solidarity” will be foreign policy differences. Qatar’s foreign minister has made clear that his country won’t change its relationships with Turkey and Iran as a result of the reconciliation. Kuwait and Oman have also taken more accommodating positions vis-à-vis Tehran. Riyadh will be as important in balancing the different foreign policy interests within the GCC as it was in ending the blockade of Qatar.