The setting before Parliament of the UK government’s legislative agenda for the two years leading up to the expected exit from the EU, has provided a further opportunity for ‘soft’ Brexiters in the UK to rekindle a debate about how detached from the EU the UK should aim to be. After the UK election, my colleague Jade Rickman and I examined the renewed debate over the possibility of customs union between the UK and the EU. Last week, a group of UK opposition MPs tabled an amendment calling for the UK to remain in “the EU single market” and “the customs union”. This would certainly be a very soft Brexit indeed.

But is it possible? Not in the sense of politically feasible (which is a whole other issue), but literally? It may seem pedantic, but it is worth clarifying why it is not, unless you are very clear what you mean. The British politicians making this argument are not advocating staying in the EU – they advocate joining the European Free Trade Association (EFTA) as a means of becoming part of the European Economic Area (EEA) alongside Norway, Lichtenstein and Iceland, and thus participating in the EU single market via this associate status. 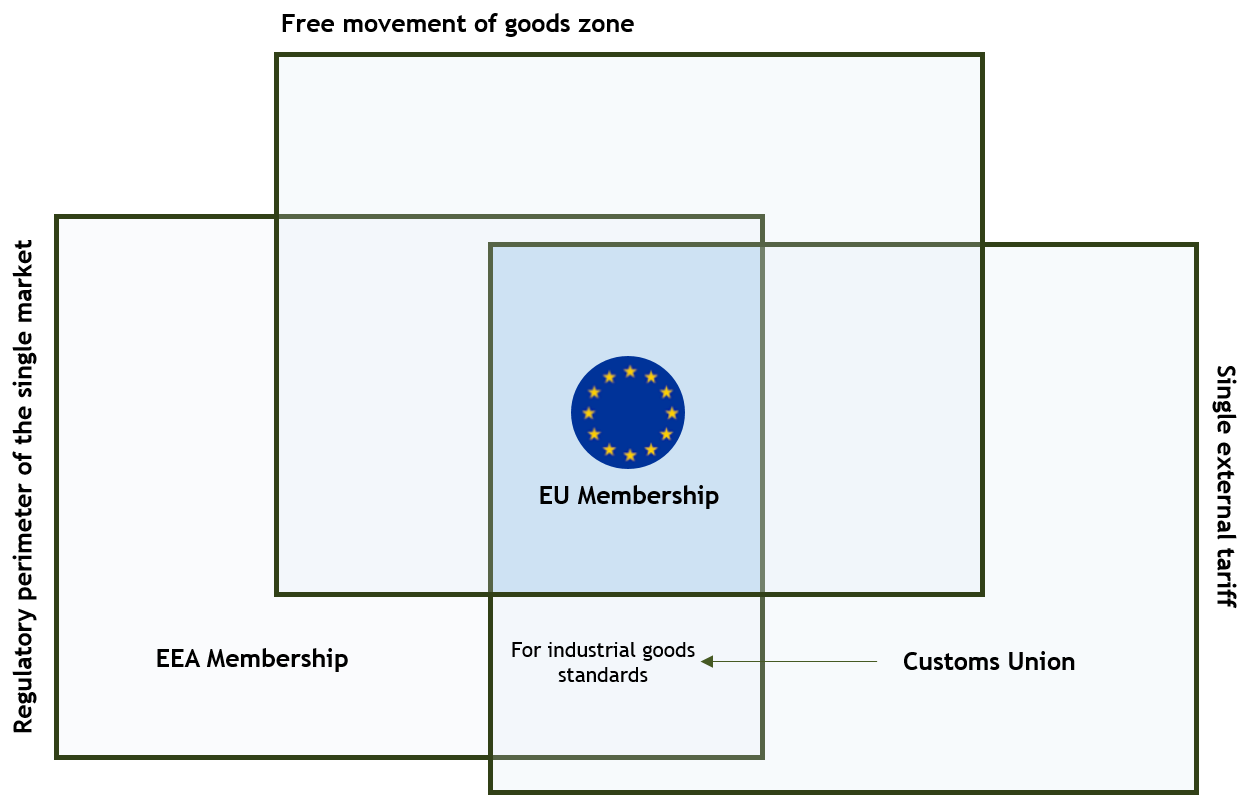 But the EEA is not a customs union. Nor can it be, because the EFTA states have their own external tariffs and conduct their own external trade policies, both collectively as EFTA and as individual members. The definition of a customs union is a group of states that has given this up, at least with respect to border tariffs. This is the primary reason goods are processed by customs when they cross the border between a non-EU EEA state (like Norway) and the EU (Sweden) – because they have to be assessed for compliance with EU origin rules, among other things.

Turkey, which is in ‘the’ customs union with the EU has ceded control of its external tariff for industrial goods to the EU and operates a ‘single tariff’ set by Brussels. Its trade with the EU still has to be processed by customs, in part because the Turkish customs union with the EU covers only industrial goods and some processed farm goods. But it is not a full participant in the EU single market, because it maintains control of most of its laws – over services market regulation and food product standards, for example.

So, you can’t be in both the EEA and a Turkish-style customs union with the EU. This will end up being relevant when the EU and the UK discuss transitional arrangements for a UK exit, because both customs union (which keeps the UK inside the single tariff, but outside the single market) and EEA membership (which keeps the UK in the single market but outside the single tariff) have been mooted as transitional models, but both have limitations in terms of business continuity, and they cannot be combined. Importantly, neither works as a way of avoiding a disruptive imposition of border checks for trade eighteen months from now before either side is properly prepared.

Of course, you could design a new variant of EEA membership that was in a customs union with the EU, by taking the EEA model of transposing and applying the bulk EU law, in return for single market participation rights, and additionally agreeing to adopt the EU’s single external tariff and external commercial policy as your own. A version of this model already exists. It is called EU membership.