A stronger Europe in the world

EU trade policy over the next five years will in many respects be defined by an evolution of outgoing Trade Commissioner Malmström’s ‘Trade for All’ strategy. At the level of content, this will be reflected on a high level of continuity on long-standing EU trade policy tenets: the defence of the multilateral trading order, the new EU FTAs trade negotiation (eg with Australia, New Zealand, Indonesia and the US), and the ratification and implementation of concluded trade deals, such as with Mexico, Mercosur and Vietnam.

Ursula von der Leyen’s trade policy vision is, however, also one of projecting renewed EU assertiveness and strength in the defence of its interests, values and high standards in an increasingly hostile world. Escalating trade wars, constant tariff threats from close allies and a digitalising world under Asian and US leadership are all contributing to a sense of ‘loss of control’ in the EU, increasingly fuelling support for populist movements. The drifting of the WTO into irrelevance on the back of disagreements over its dispute settlement mechanism’s Appellate Body has only reinforced perceptions that the EU must take matters in its own hands.

This will be reflected in a renewed, clear mandate for the incoming EU Trade Commissioner to rethink the EU’s level playing field policy toolkit. In practice, this is likely to take the form of a more assertive deployment of existing trade defence instruments and the EU’s new investment screening framework, and a policy pipeline focused on driving greater reciprocity, notably via the completion of the 2012 International Procurement Instrument proposal, a new carbon adjustment tax and the inclusion of ambitious and enforceable sustainability chapters in all future EU FTAs.

Von der Leyen’s choice of Phil Hogan to drive this agenda, alongside new DG trade director general Sabine Weyand, by and large reflect this desire for projecting strength. Both are well seasoned negotiators known for their ability to navigate politically complex and sensitive dossiers, such as Brexit (Weyand) and the Mercosur talks (Hogan). A key test, however, will be whether they are able to translate their proven negotiating skills into the management of the EU’s increasingly fractious, fragmented and trade sceptic domestic stakeholder landscape in the European Parliament and European Council, where the instinct is increasingly to use trade policy as a means to deliver other political ends, such as environmental goals.

Squaring the circle of EU trade policy: 3 key tests for the next Commission 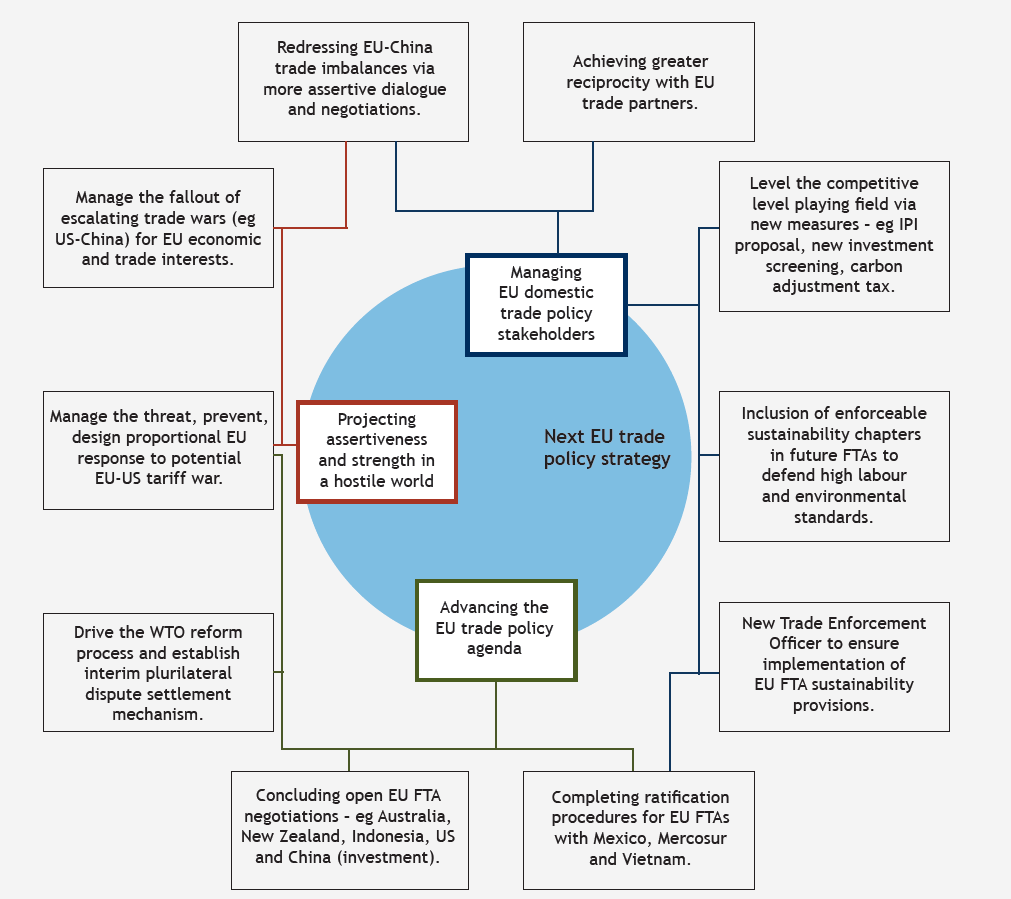 This blog was written for Global Counsel's panel discussion on the new Europea Commission in 2019 and forms a part of a wider briefing pack.