What next for Brexit?

Brexit thus far has been a story of timetables. Its negotiating and political rhythm has been determined by deadlines, flexible and inflexible, and the potential cliff edges that lie beyond them.

The design of the withdrawal agreement and its transition/implementation period mean that this pattern will be repeated in the next phase of Brexit: the negotiation of a future relationship. The new deadlines that lie before us will be used by actors in the UK and the EU to attain their goals, and will shape the potential outcomes, so for anyone interested in those it is essential to understand the process of the next year, however dry.

European Commission president, Ursula von der Leyen, illustrated this point by her speech to the LSE this month, saying that “without an extension of the transition period beyond 2020, you cannot expect to agree on every single aspect of our new partnership. We will have to prioritise.”

So, what happens next?

The European Commission has held a series of seminars for the council’s Article 50 working party on the various aspects of the future relationship. It has published the slides used here, which avoids, inter alia, publication through leaks. This is to familiarise the member states with the content of the commission’s draft negotiating mandate, which sets out the parameters of the future UK/EU relationship. Through such familiarisation and by discovering their reaction the commission hopes to win the member states’ swift agreement to a mandate.

There will then follow a four-month block of negotiating time, concluded by a cluster of deadlines at the end of June. The most important such deadline is the UK’s decision on whether to request an extension of the transition period – which the British government has said it will not do and has legislated against. The end of June is also the target for concluding the EU’s and UK’s respective equivalence assessments (note assessments, not decisions on these assessments) of each other’s regulatory and supervisory regimes for financial services, which they must ‘endeavour’ to do. The EU and the UK are additionally obliged to use their ‘best endeavours’ to conclude and ratify a new fisheries agreement by the same date on access to each other’s waters and quota share. It is further expected that there will be a meeting between the British prime minister and the president of the European Commission during June to take stock of the state of the negotiations.

If there is no extension of the transition period the end of 2020 becomes a hard deadline for those parts of a new UK/EU relationship to be in place which will not fall away at the end of the year, either entirely or into other international frameworks, where relevant. The end of 2020 is also the deadline by which the commission should endeavour to adopt a decision on the adequacy of the UK’s data protection standards.

So, July 1st marks the beginning of the second block of negotiating time, of nearly four months but with August likely to see abated activity. If there is agreement on a free trade agreement the negotiations must be completed in time for it to be ratified by both parties. As the Withdrawal Agreement Act’s swift passage through parliament shows, a British government with a strong majority can achieve ratification quickly, but the EU’s process will take longer.

There is no definitive deadline for the second block – with political will, ratification time can be squeezed – but the process of agreement for a multinational, multi-institutional, multilingual bloc cannot be completed in a couple of weeks. This process is eloquently described, with some partisan passion on the Brexit debate, here.

In short, once a text of an agreement has been agreed and initialled by the British government and European Commission it must be legally scrubbed by multilingual lawyers (jurist linguists) to ensure that it is legally clear and consistent. Both sides must then agree to the scrubbed text. That agreed text must then be translated into member states’ languages, and the translations checked by the jurist linguists.

If the agreement’s content comes only under the EU’s exclusive competence it can now come into force. But if the agreement is mixed, that is it includes policies that are within member states’ competence, or power, then the process becomes more complicated. Member states must also ratify, and some require sub-national bodies to approve to complete their ratification, such as, in the well-known case of the EU’s free trade agreement with Canada, Belgium’s regional parliaments. Only when all member states have ratified can the European Council adopt a decision to adopt, i.e. accept, the agreement. Happily, however, even in the case of mixed agreements those parts which come under the EU’s exclusive competence can be provisionally applied after signature if member state governments unanimously agree to do so.

There are two upshots to this: first, that any agreement between the UK and the EU must be reached some time in October if it is to come into force at the beginning of 2021 and avoid a cliff edge, and even that requires an unusual compression of process on the EU’s side. The second is that this tight timetable is the commission’s justification to claim that not everything can be agreed this year and that there must be prioritisation. It is no surprise that they say the priorities should be what the EU wants most – coherent and effective governance of the agreement, the “level playing field”, avoidance of tariffs and fisheries access – and not issues of greater interest to the UK, such as regulatory barriers, including market access on services.

In short, this timetable will make the coming year more interesting and consequential than perhaps either the British government or the European Commission might like. 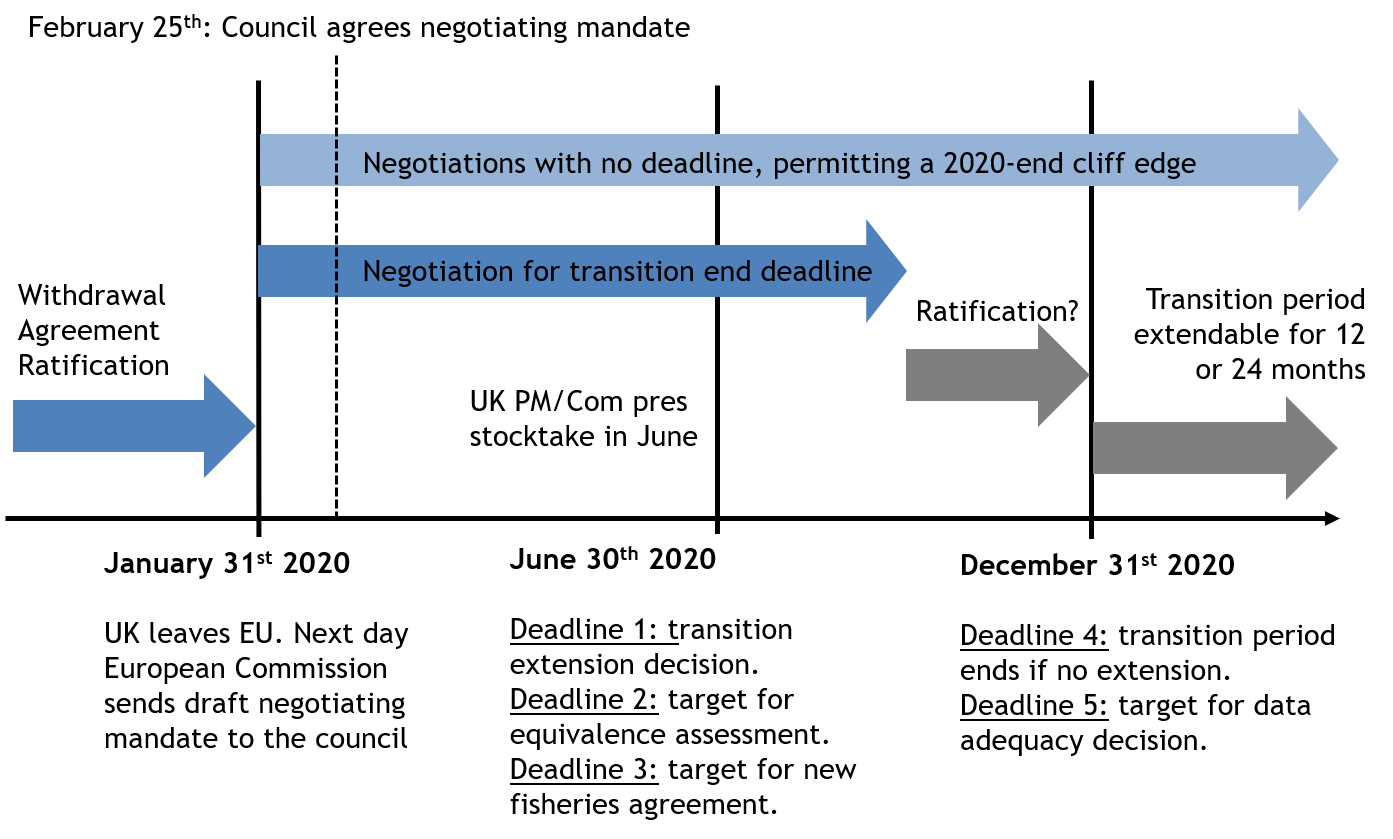